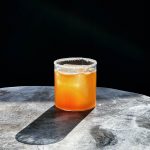 The cinnamon and lime juice combination was actually a total mistake as I was working on something else and ended up with a bit of extra cinnamon sprinkled over some extra lime juice... of course I saw it and had to taste it, voila, the idea for the cinnamon mezcal margarita!
cinnamonfalllimemezcalsummertequilawinter
0 comment 0 FacebookTwitterPinterestEmail
previous post