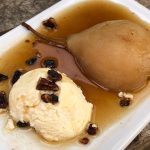 I used a new pear variety for me, Yali pears (or Ya Li). They are amazing crisp firm when ripe and perfectly stand up to poaching! Add a bit of honey, cinnamon, and Bourbon and it's an instant recipe for deliciousness! Still working on my no churn olive oil ice cream recipe (much debate in the family) but will link it as soon as it's completed! Otherwise my no churn banana salted caramel ice cream, my honey cinnamon ice cream, or just plain vanilla would be delicious!
bourbonfallhoneypears
0 comment 0 FacebookTwitterPinterestEmail
previous post