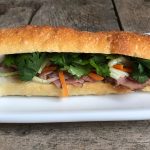 There was a little Vietnamese restaurant in Seattle when I first graduated, up on the edge of the International District and Atlantic, that my friends and I would hit at least once a week... the Banh Mi were SO GOOD. Trying to remember the name but can't. Everything since then is a comparison to that restaurant. Actually, come to think of it, there's a LOT of food from growing up in the Pacific Northwest and living in Seattle after college that built the foundation for my love of food.
cilantrofallporkspringsummerwinter
0 comment
0
FacebookTwitterPinterestEmail
previous post